His numerous books delved deeply into the Billboard charts, developing what an admirer called “the de facto history of recorded music.”

Amanda Castro, Brinda Guha and Arielle Rosales come from different traditions but share a reverence for the dancers’ foundation: the ground.

Summer Horror in the City

For fans of scary movies, three horror series around New York just may keep you up all night. 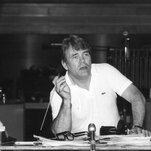 Donald Pippin, Conductor on Broadway and Beyond, Dies at 95

As music director, he contributed to the success of acclaimed shows including “Oliver!,” “Mame,” “La Cage aux Folles” and “A Chorus Line.”

Claude Rutault, Master of the Painted Word, Is Dead at 80

His paintings were actually instructions for making paintings. One of his signature “protocols” was to paint a canvas the same color as the wall on which it would hang.

The orchestra’s power in theatrical music was on display in two concerts at Carnegie Hall led by Yannick Nézet-Séguin.

This month’s streaming picks include an Indonesian buddy film and a thriller about a hit man who doesn’t kill. 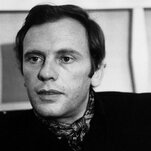 For 50 years, in movies like “A Man and a Woman” and “My Night at Maud’s,” his specialty was playing the flawed Everyman.

On his second album, “Farm to Table,” the indie-rock singer and songwriter finds no easy comforts in his own ascent.

How a TV Series Undersells the Danger of the Sex Pistols

A music critic who teaches college students about the punk movement takes stock of “Pistol,” the new FX drama about the 1970s British punk band.

In ‘First Kill,’ Hunter and Prey Fall in Love

This Netflix series about a star-crossed teenage romance between a bloodsucker and a monster hunter has roots in both “Romeo and Juliet” and “Buffy the Vampire Slayer.”

‘Cha Cha Real Smooth’ Review: The Boy in the Bubble

A recent college graduate moves back home, drifts along and strikes up an unlikely friendship with a single mother in this Sundance indie.

The director Colin Trevorrow narrates a sequence featuring the actor, a testy Therizinosaurus and a murky pond.

A quiz bowl winner and students at an elite music camp struggle to figure out who they really are in novels by Kate Egan and Mariama J. Lockington. 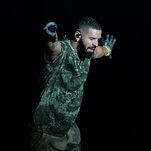 Hear tracks by beabadoobee, Perfume Genius, the Beths and others.

10 New Books We Recommend This Week

Suggested reading from critics and editors at The New York Times. 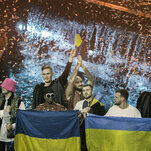 Ukraine Is Ruled Out of Staging Eurovision in 2023.

The Eurovision Song Contest’s organizers said on Friday that Russia’s invasion meant Ukraine could not stage next year’s event, even though it won this year’s contest. 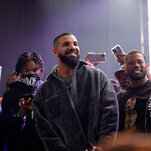 The rapper’s 14-track seventh studio album came out at midnight, about six hours after it was announced on social media. 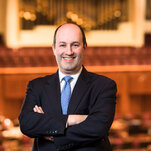 Gary Ginstling, executive director of the National Symphony Orchestra, will replace Deborah Borda as the orchestra’s president and chief executive next year. 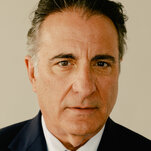 The actor, who’s playing the role onscreen and in reality, understands his rigid character: “He’s an amalgamation of everybody I’ve ever known, including myself.” 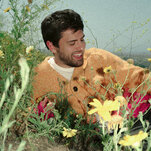 At 25, the indie writer, director and actor is making waves in Hollywood. His second feature, “Cha Cha Real Smooth,” could start a new career chapter. 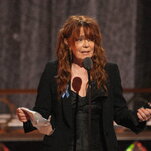 She Won a Tony. But Deirdre O’Connell ‘Can’t Think About That.’

We spoke to the veteran actress as she returned to work, preparing for the opening of her new Off Broadway show “Corsicana.” 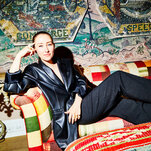 The actress, known for playing Princess Anne in “The Crown,” embodies a working class con woman in a new limited series on Amazon Prime Video. 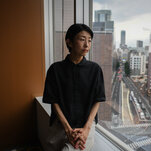 Chie Hayakawa Imagines a Japan Where the Elderly Volunteer to Die

The premise for Chie Hayakawa’s film, “Plan 75,” is shocking: a government push to euthanize the elderly. In a rapidly aging society, some also wonder: Is the movie prescient?

Six new paperbacks to check out this week.

Late Night Delves Into Day 3 of the Jan. 6 Hearings

Trevor Noah joked that Donald Trump “lives his entire life as if he is the bad kid in one of those antismoking P.S.A.”

Review: In High-Tech ‘Orchard,’ It’s Hard to See the Forest for the Trees

Jessica Hecht, Mikhail Baryshnikov and Chekhov himself too often get overwhelmed by this ambitious Arlekin Players Theater adaptation. 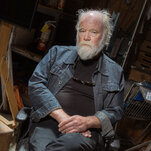 The animator and visual effects artist, whose credits include “Jurassic Park” and “The Empire Strikes Back,” has directed his passion project, “Mad God.” 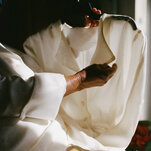 Tell Us the Story of Your Family Heirloom

Add your voice to a new project examining items that tell stories of history, culture and race in America. 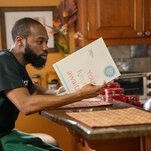 How Much Watching Time Do You Have This Weekend?

A wake-and-bake comedy returns to Showtime, and a sumptuous new drama set on the Italian Riviera comes to PBS. 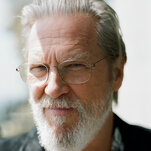 ‘The Old Man’ Brought Jeff Bridges to TV. John Lithgow Had No Advice.

The two award-winning actors had never worked together before this brooding FX thriller came along. Who knew the journey would become so existential?

In the Documentaries of the Blackwood Brothers, Great Artists Are Explored

Several films from Michael and Christian Blackwood, grounded in the nitty-gritty of art-making, are available to watch through June 28. 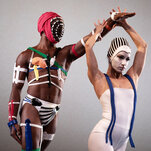 Programs at the Joyce Theater feature early works that show how Taylor integrated the radical and the popular. 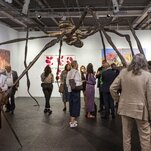 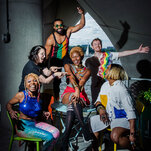 Honoring Pride, Juneteenth and the Fourth of July, the festival features Idina Menzel and Tonya Pinkins alongside poets, fire artists and marching bands.

‘Bitterbrush’ Review: Alone on the Range

Though this quiet documentary about two young range riders recalls a western or two, it presents a modern-day portrait of hard work and friendship. 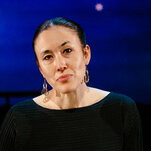 To Preserve La MaMa’s Legacy, a Shift in Leadership Styles

Championing collaboration and digital projects, Mia Yoo is forging her own path at the experimental theater incubator. 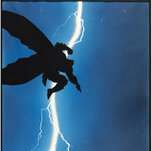 Going, going, gone: The original art for a Batman cover sold for $2.4 million at an online auction and joins a select group of high-priced comic book or fantasy artworks. 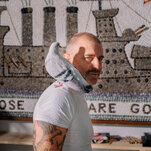 The audacious artist transforms seaborne plastics into maritime art at the Brooklyn Museum, driving home his message about their devastating environmental impact. 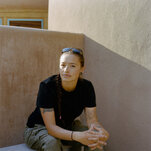 Rose B. Simpson Thinks in Clay

“Clay was the earth that grew our food, was the house we lived in, was the pottery we ate out of and prayed with,” says the Native American sculptor and rising star. 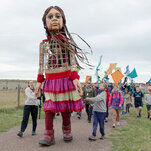 Last year, the 12-foot-tall Syrian girl trekked from Turkey to Britain to find her mother. This fall, she’ll visit all five boroughs.

Review: At Ailey, Love Is a Battlefield, Film Noir Style

Alvin Ailey American Dance Theater returns to Lincoln Center with an anniversary and a premiere by its resident choreographer, Jamar Roberts. 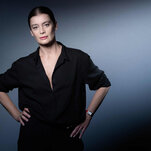 The departure of Aurélie Dupont, who is leaving to focus on personal projects, follows a turbulent time at the esteemed company.

A gay man gets trapped in a web of lies after his overeager best friend concocts an artificial relationship for him on social media. 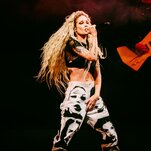 How TikTok Is Changing Marketing in the Music Industry and Beyond

Artists and civilians alike chafe at the pressures of presenting themselves online. 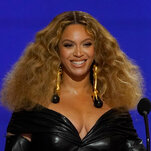 The new project, apparently with the subtitle “Act I,” will be released on July 29, according to the singer’s social media accounts. 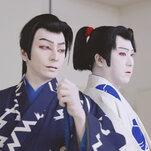 Cameras follow Ikuta, an actor on popular Japanese teen dramas in the 2000s, as he learns Kabuki’s expressions and movements from a friend.

‘Stay Prayed Up’ Review: Spreading the Gospel of Love

A new documentary about the gospel ensemble the Branchettes and its guiding light, Lena Mae Perry, is a plain-spoken tribute. 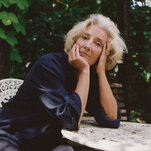 Emma Thompson and the Challenge of Baring All Onscreen at 63

The actress made the choice to disrobe. Still, she says, it was the most difficult thing she’s ever done in her four-decade career.

Most Read
Chinese university students sent home amid protests These 10 Bay Area clergy are now linked for the first time to Catholic church sex abuse scandal ASK IRA: Will Herro-Adebayo pick-and-roll emerge as Heat game of choice? Meet Grant Conner, the Man with a Heart of Gold, Revolutionising the World of Gold America Forward Agency is The Veteran-Owned Marketing Agency to Partner With World Cup schedule: Start times for every match and how to watch 6 takeaways from the Chicago Bulls’ 114-107 win over the Utah Jazz, including Lauri Markkanen’s Biden to host congressional leaders on lame-duck sprint OHSUN Banchan Deli & Cafe in Pioneer Square will serve Korean food, comfort US consumer confidence falls in November for 2nd month