By Steve Butler THE FRONT TRUCK in the photo was made by Wyandotte and was identified as their “FRONT LOADER TYPE DUMP TRUCK No.122.” The truck had a “W” above the grille and was a member of their “Mid-Size Checker-Style Series” introduced for 1954. Early versions of the truck had solid black rubber wheels. The […]

The Summer Chicago Toy Show is Back on July 24th!!

THOSE WHO HAVE BEEN attending the show from 2007 and earlier will remember what a treat the Summer Show always was, and for new folks who weren’t with us then, we have a great weekend in store for you. After recent renovations, the fairgrounds now features five buildings with air conditioning: Prairie Events Center West, […]

By Steve Butler This 10.2-inch pressed steel sedan or limousine was issued by Marx circa 1936. The decal above the split rear windows reads in part “PRESS DOWN HERE” just below a hand doing so on a car’s roof. Pressing down compresses a piece of spring steel and loads a set of gears eliminating the […]

By Rick Ralston WHO CAN PASS puzzle pieces spread out on a table and not accept the challenge of finding a few pieces to contribute to the whole? Or rejoice in the gratification of completing the entire puzzle? Before there was television, puzzles were a common form of evening entertainment. The beginning of puzzles goes […]

Marklin Quality at Less than a Marklin Price

By Louis Natenshon LIKE MOST COLLECTORS of early tin toys, I feel that Marklin’s reputation for quality and desirability is well deserved. The only thing I frequently don’t like about Marklin toys is the price. I was living in Boston in 1968, where I bought my first old toy. Friends took me to their favorite […]

By Steve Butler BY THE MID-1950s Marx was continuing to increase their already large product line by adding a number of plastic toy vehicles. This may have been in part to counter several other U.S. makers of plastic toys such as Renwal and Ideal. Clearly the Marx Fix-It line, which did include several plastic “winners” […]

Armed over the years with guidance from the Bertoia family, Knowlton collected with an eye for art and paid the price to acquire toys of exceptional rarity and quality VINELAND, N.J. – One of the most exciting events ever to be held at Bertoia Auctions’ New Jersey gallery took place on March 11-12 with the […]

Fabled collection, 90% of which is graded 9.0 condition or better, will be offered in series of three unreserved auctions over 12-month period, with debut sale slated for fall 2022 DENVER, Pa. – Morphy Auctions is delighted to announce that they have been chosen to auction the world-class Bobby Knudsen Jr Collection of antique and […]

By Jacky Broutin THE REWIND TIME machine is ON! In the early 1990s, when I had my TOYMANIA show at the Pavillon Baltard, it was certainly the greatest Antique Toy Show in all Europe. Three decades later, after passing three times in different hands, the show alas died for good … In 2019, Samy ODIN […]

The family of Elmer Duellman has recently announced their 2022 Elmer’s Auto and Toy Museum schedule, and it has been revealed that this season will be the 29th and last year operating the museum. In the late ’60s, through the ’70s, and into the ’80s Elmer, with the wholesale support of his wife Bernadette, was […]

By Steve Butler THE PICTURED green hot rod was issued by Saunders Tool & Die. The majority of this very popular toy were in red plastic with much fewer examples in blue, green and yellow produced. Saunders toy productions ended around 1956. Sometime thereafter some other firm, with Marx being the best suspect, acquired some […]

By Steve Butler IN THEIR 1932 FACTORY CATALOG Tootsietoy introduced twenty-five new toys. That group included a new No. 4666 Racer which the company touted as being “An exact reproduction of the ‘World’s Fastest Racer’.” Tootsietoy was referring to Sir Malcolm Campbell’s Bluebird which had set the and speed record on Daytona Beach in 1931. […]

Antique Toy World Magazine for May 2022

TABLE OF CONTENTS May 2022 • Volume 52, No. 5 In Memory of Stevie Weart Table of Contents In Memory of Boyd A. Hitchner American and European Trains Roll into the Spotlight at Bertoia’s April 21 Auction of the Legendary Paul Cole Collection, Part III Ray Burgess Coca-Cola and Soda Pop Advertising Collection a Refreshing […]

Winning bidder, who owned the tank previously but sold it 20 years ago, says it will be displayed at a new private toy museum in Florida WILLOUGHBY, Ohio – Popeye toys haven’t seen an appreciable downturn in the collector marketplace at any point in the past 25 years. In keeping with that trend, vintage toys […]

Scientific instruments come under the lens in Auction Team Breker’s sale on 14 May 2022 in Cologne, Germany. Of particular note is a fine group of 18th century timekeeping devices, highlighted by an Augsburg calendarium perpetuum (perpetual calendar) from 1720. The silver book-form pocket calendar with four bound-in bone tablets is engraved with delicate motifs […] 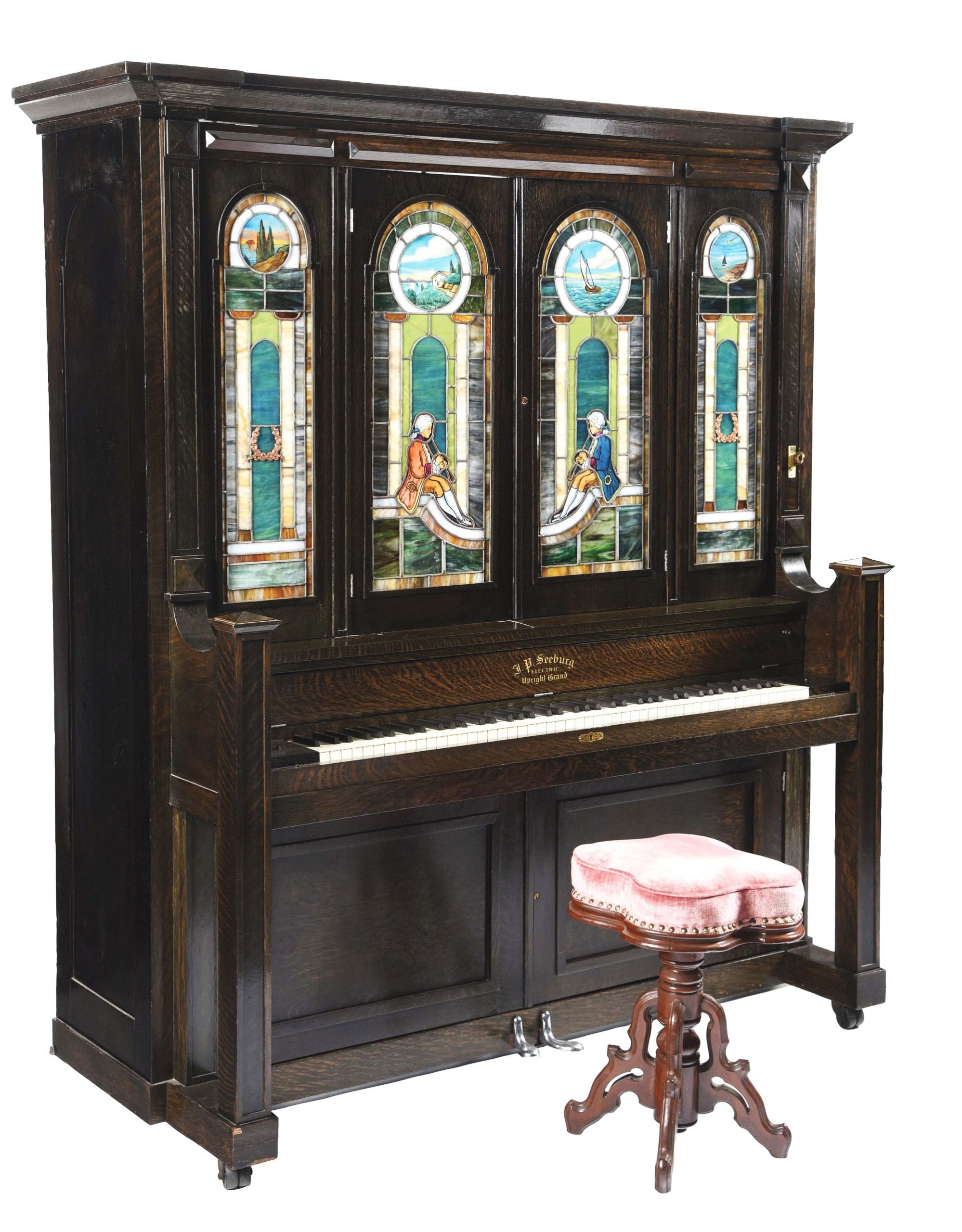 Featured: early arcade, music, gambling, vending and other slot machines plus alcohol, soft drink, gum, tobacco, soda fountain and other desirable advertising and signage DENVER, Pa. – Long before the era of instant entertainment from TV, downloaded music and streaming videos, Americans could amuse themselves with a pocketful of change at an arcade. The thrilling […] 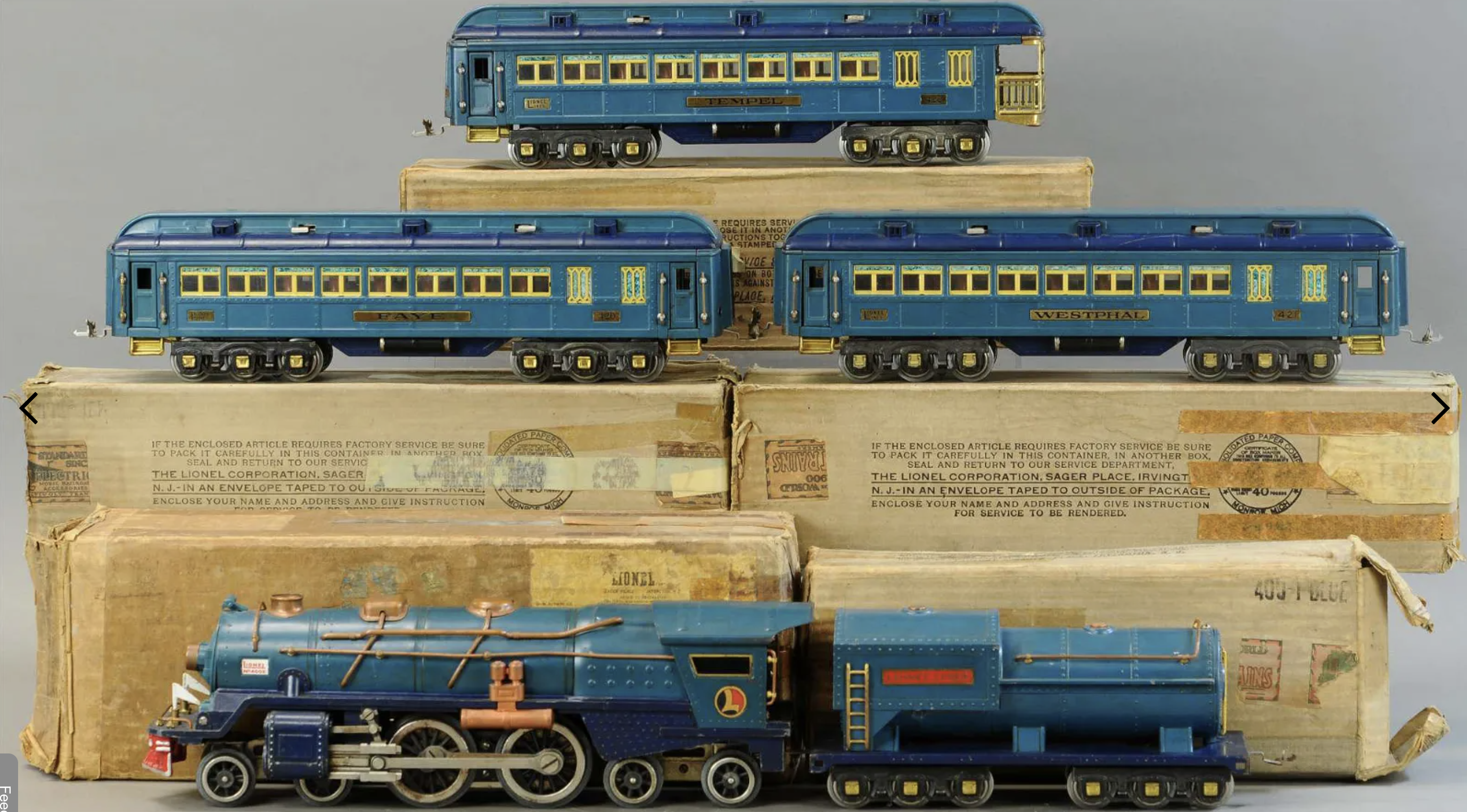 American and European trains roll into the spotlight at Bertoia’s April 21 auction of the legendary Paul Cole collection, Part III 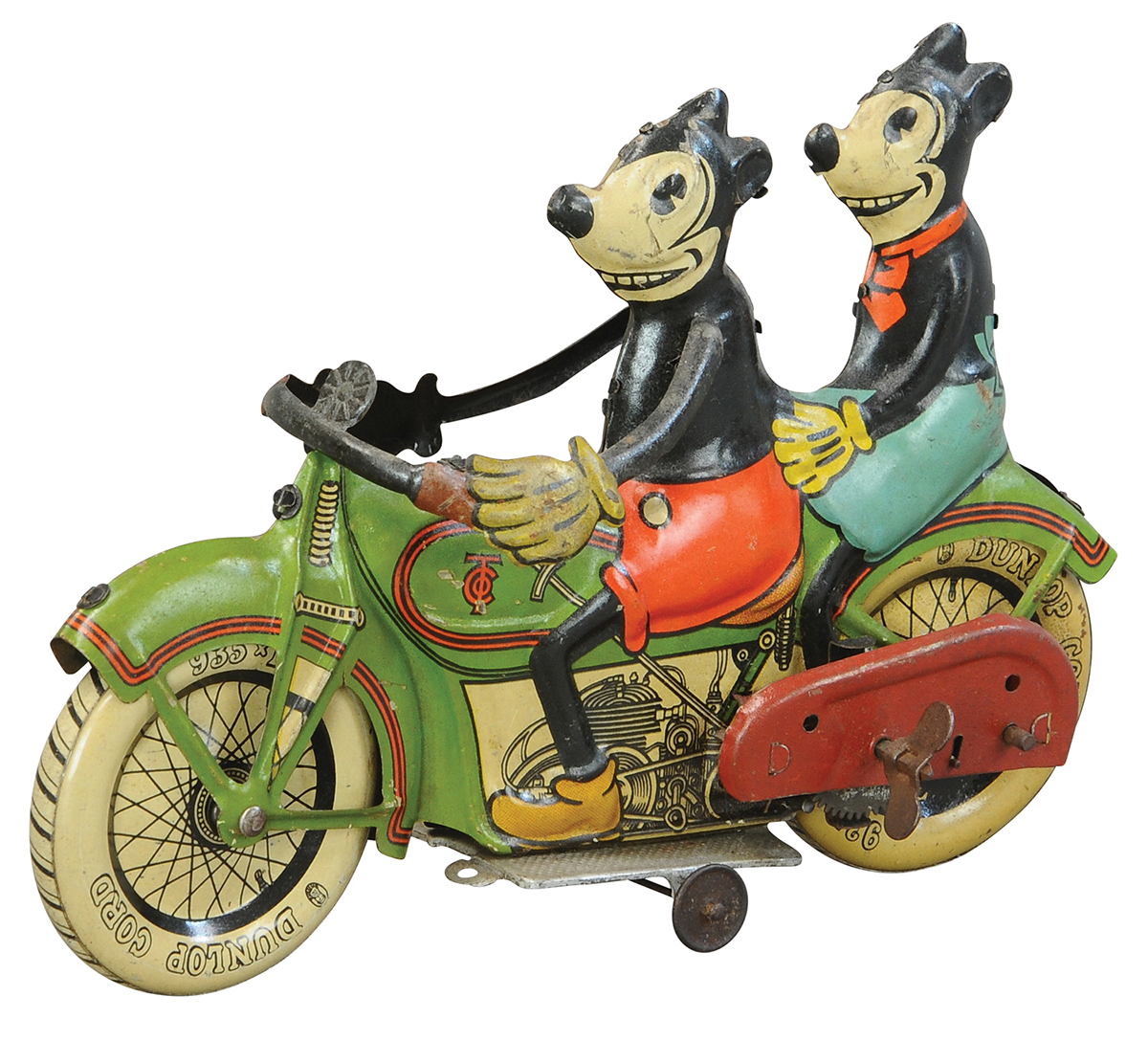 A former NYC gallerist, Knowlton collected with an eye for art and paid the price to acquire toys of exceptional rarity and quality VINELAND, N.J. – One of the most exciting events ever to be held at Bertoia Auctions’ New Jersey gallery took place on March 11-12 with the sale of the spectacular Monique Knowlton […] 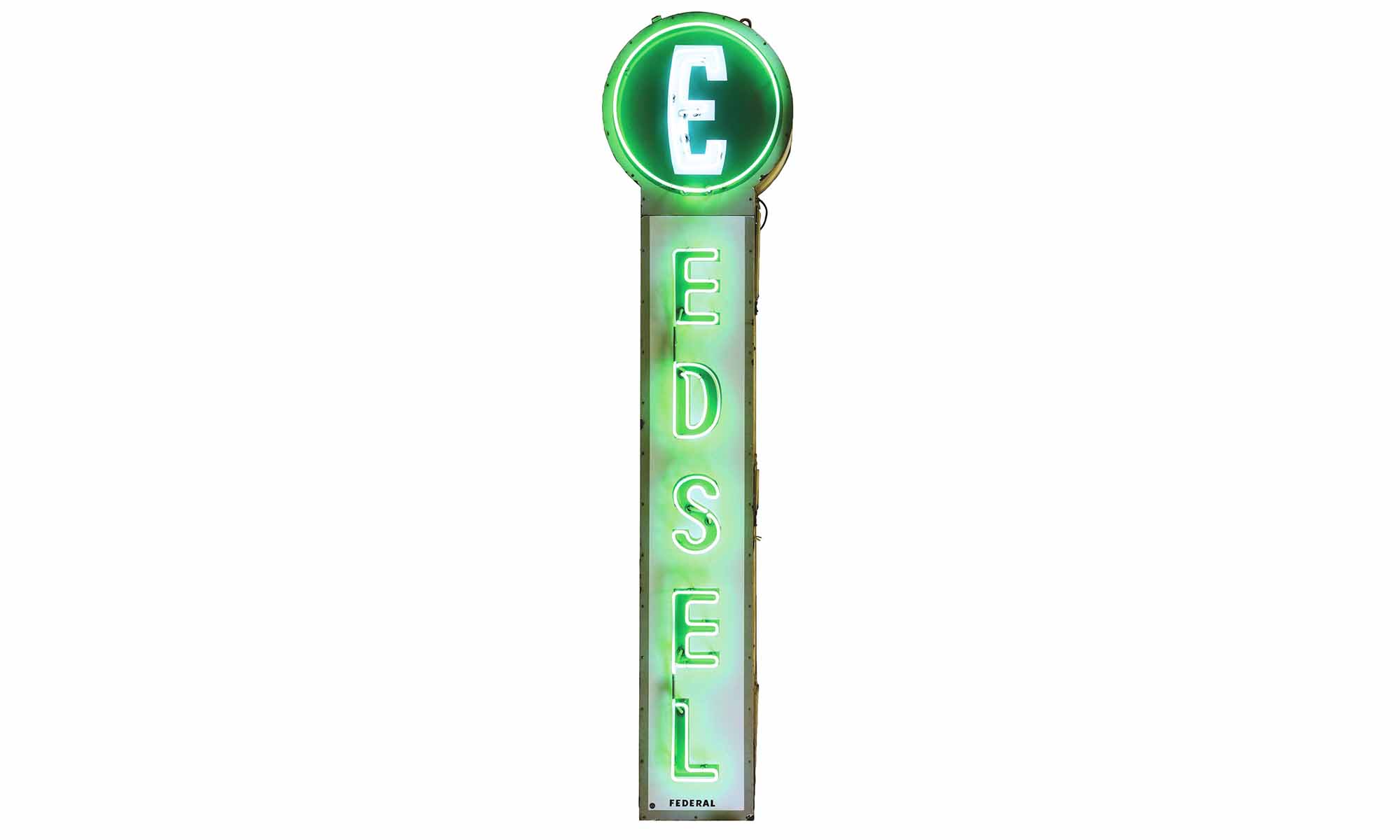 By Steve Butler AN ARTICLE IN last month’s issue of Antique Toy World dealt with situations in which packaging information and or graphics are misleading. They were called discrepancies. That is, they do not correctly or sufficiently disclose the identity of the contents, at least to expectations that seem reasonable to a writer/collector. Then only […]

By Steve Butler THE CAB ON THE pictured rig is a B model Mack. This style cab was the fourth semi tractor issued after WWII by Tootsietoy. The three preceding styles in order of issue were their versions of a Diamond T, an L model Mack and a cab-over-engine (C.O.E.) International. The tanker trailer on […] 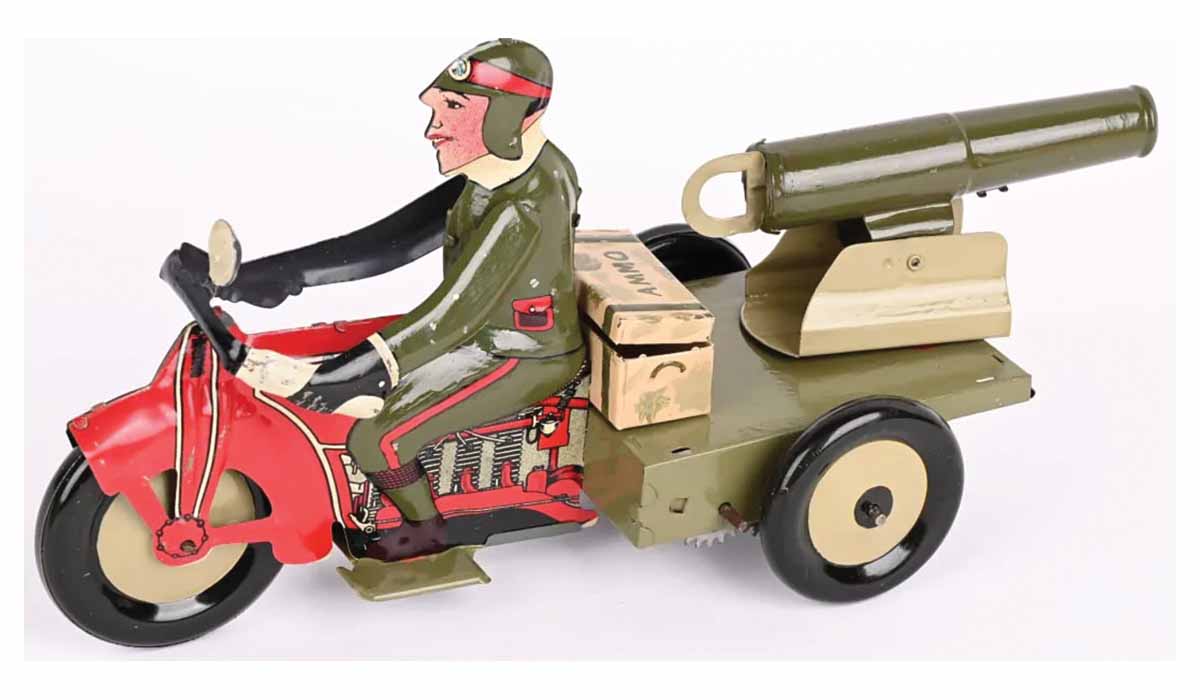 Enthusiastic response to company’s first major offering of cast-iron toys, with a promise of more to come in April WILLOUGHBY, OH – There’s no great mystery as to why vintage toys are so popular with collectors. They’re colorful, they’re fun, and they invariably prompt the comment so familiar to auctioneers and toy dealers: “Wow! I […] 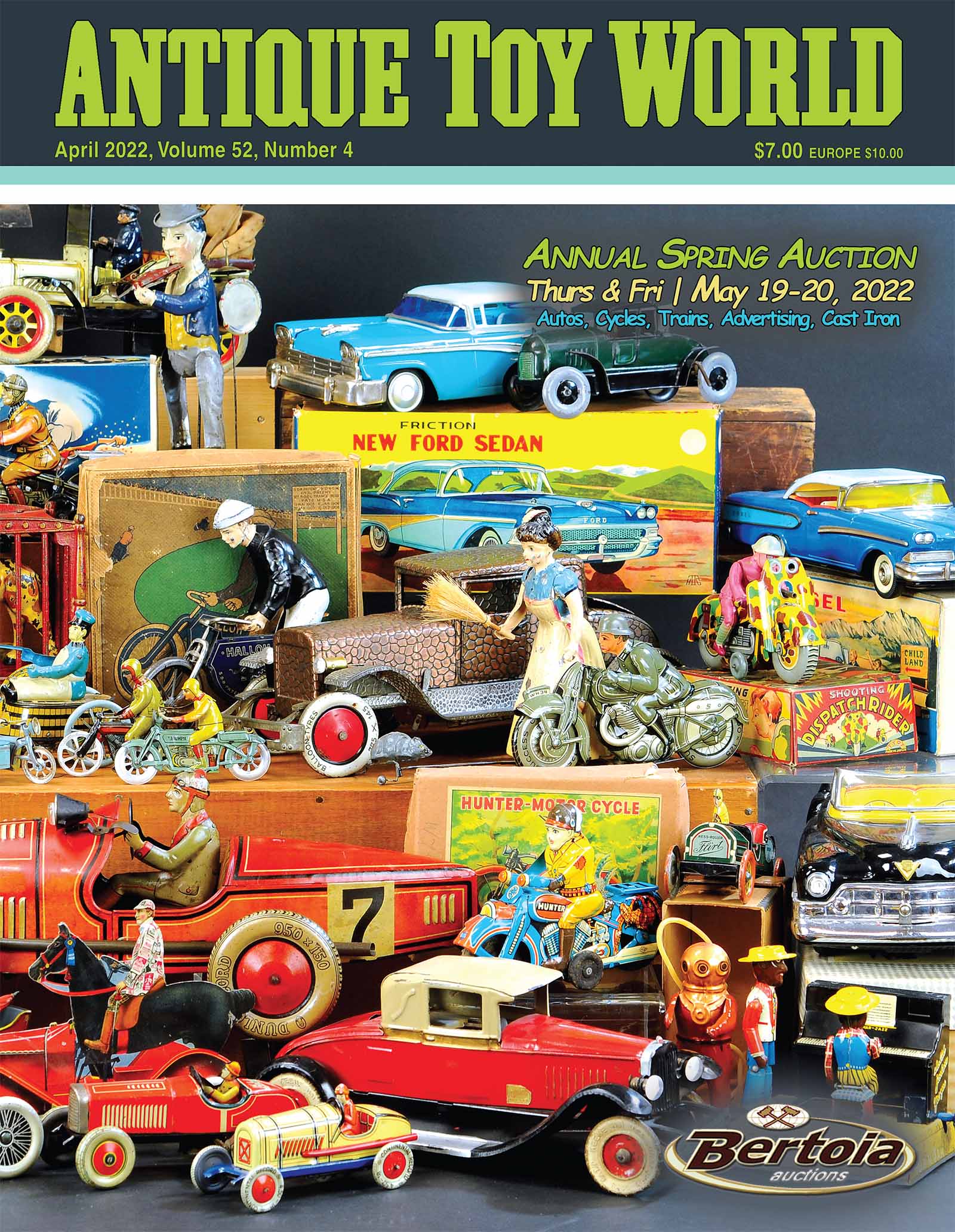 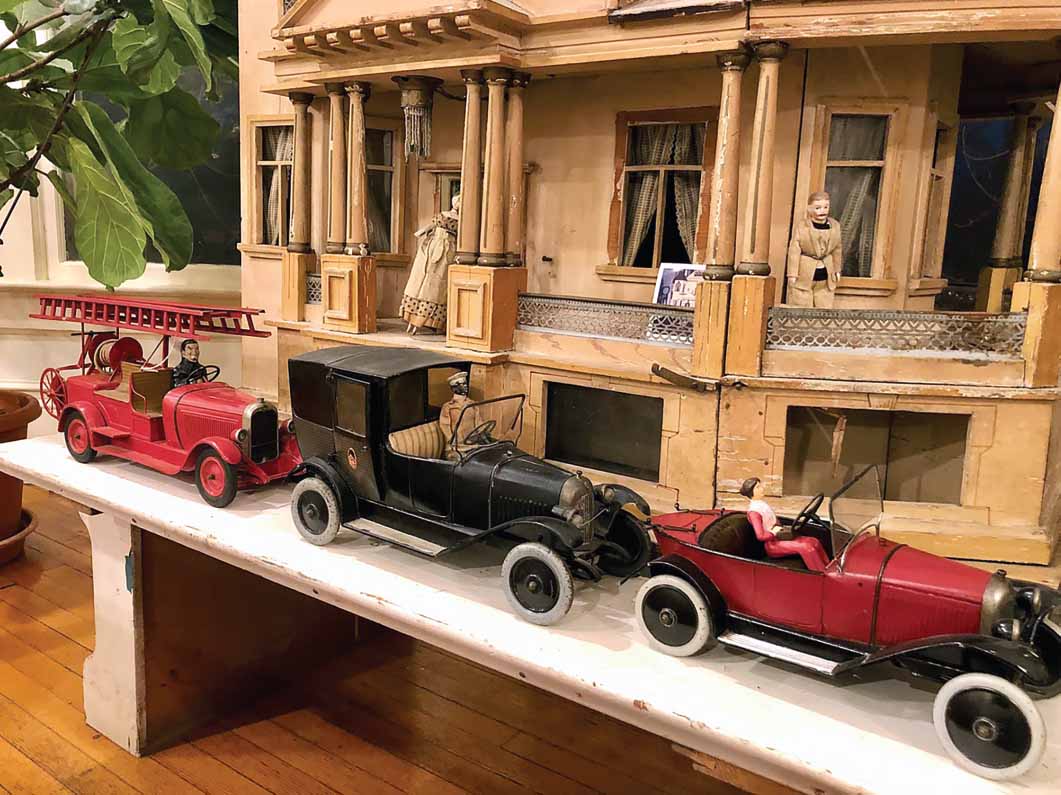 By Louis Natenshon CITROEN TOYS Best known for the car company he founded, Andre Citroen actually made his fortune earlier. He obtained the patent for helical cut gears and manufactured them. They were in demand when factories changed from overhead pulleys, to electrical motors that powered machinery. The inverted ‘V’s, seen on Citroen emblems, represent […] 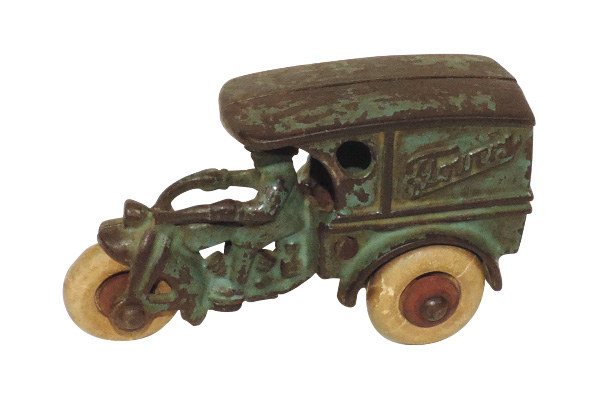 MAY IS A GREAT TIME to get on the road and head to a great auction. Point your road machine into a warm wind, blue skies and sunshine. That makes us all smile. Finding a treasure on that road trip might trigger a memory from our childhood. That too brings out those smiles. The May […]

Considered the ultimate catch in its category, boxed Popeye and Olive Oyl Tank could reach $30,000-$40,000 range WILLOUGHBY, Ohio – That swaggering, wisecracking cartoon sailor Popeye has been depicted on countless toys and memorabilia since first appearing in the Thimble Theatre comic strip in 1929. With his spinach-powered superhuman strength, he was an immediate hit […] 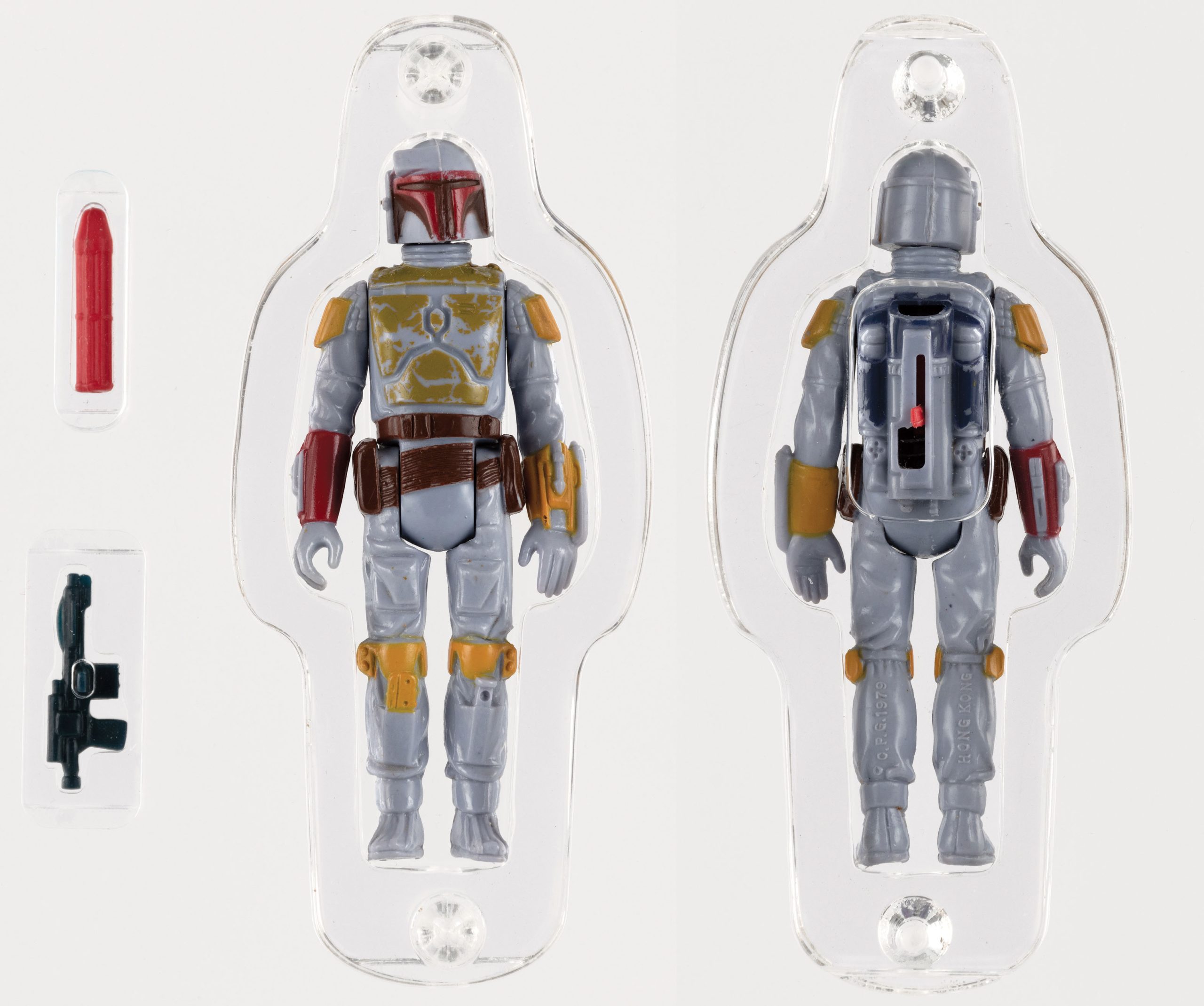 YORK, Pa. – Last night, Hake’s in York, Pennsylvania, set a new world auction record with the sale of a Kenner Star Wars Boba Fett rocket-firing prototype action figure. The Version 2 J-slot prototype, made in 1979, attracted 27 bids before closing at $204,435. It was won by an online bidder in California. The previous […]

VINELAND, N.J. – On March 11 and 12, Bertoia’s will auction, without reserve, the Monique Knowlton antique toy collection, a spectacular assemblage of comic character, German automotive and American toys; as well as out-of-this-world Japanese robots and space toys. While she was never a regular at toy shows or auctions and is probably unknown to […]

Subscribe now. By Louis Natenshon IF YOU COLLECT antique toys which were not made in America, it is likely that most of your collection came from Germany, Japan, or England. As was the case in those countries, France had a robust toy industry. In 1889, nearly 400 French toy companies were listed. They produced a […]

Subscribe now. By Steve Butler ONE DEFINITION OF a discrepancy is “a lack of compatibility or similarity between two or more facts”. After only a few experiences in buying, collecting and researching toys, evidence of discrepancies in advertisements, factory literature, toy descriptions, graphic depictions and more have become increasingly difficult to overlook. It’s a problem […]

Subscribe now. By Steve Butler KANSAS TOY was in the habit of numbering their slush cast toy vehicles and including that number on the left side of the toy. This 3 3/4-inch tractor is numbered 17. A number 17 tractor was found in Kansas Toy reference material, and it was identified as being a Fordson. […] 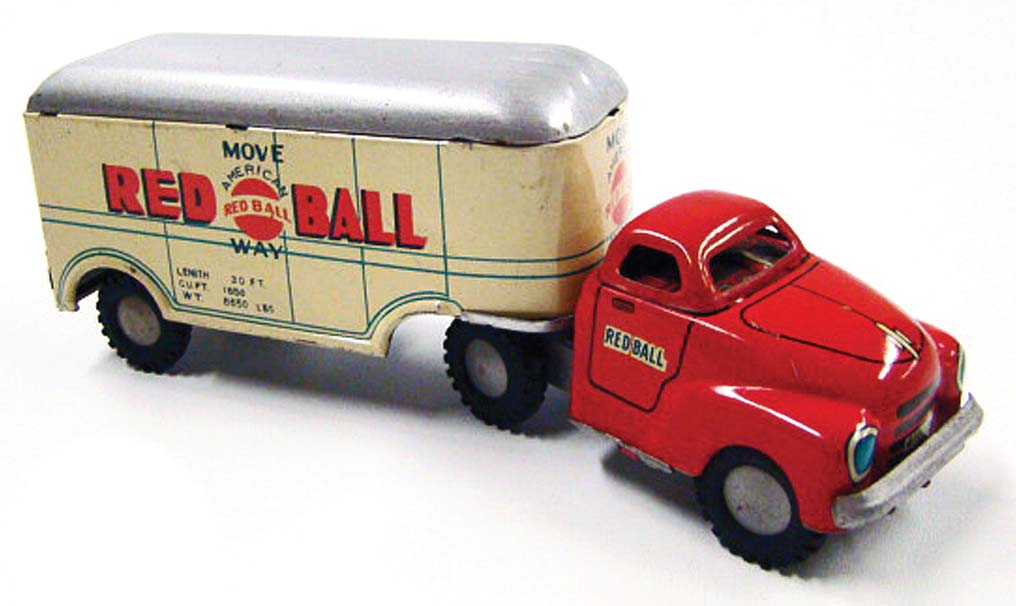 By Steve Butler TIN TOYS NOW considered vintage have a definite advantage in comparisons with toys made of pressed steel, die cast white metal, plastic, cast iron, et. al. That advantage is the use of lithography which is almost akin to photograph printing on tin. Three 1950’s era tin toy semis can serve as illustrations. […] 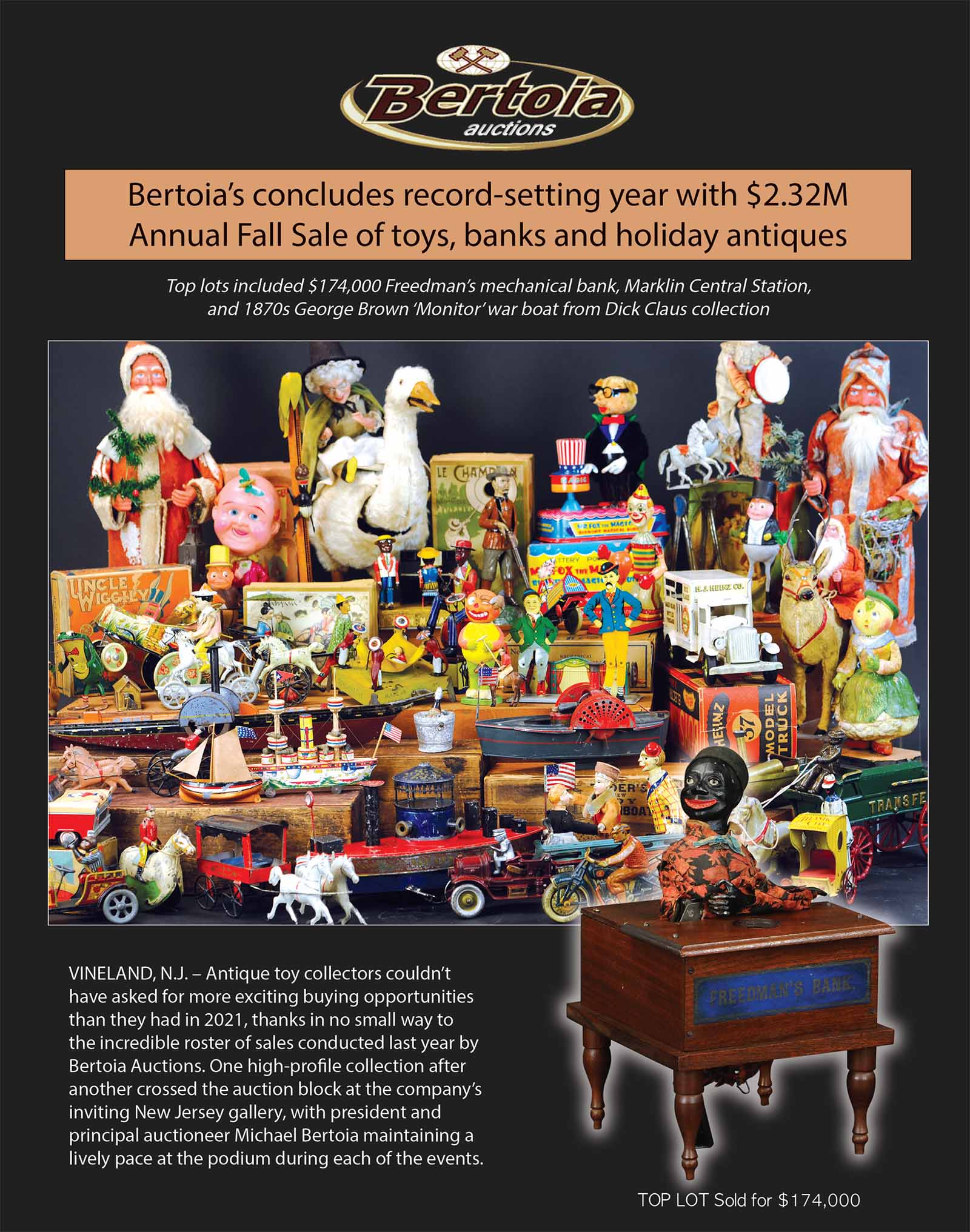 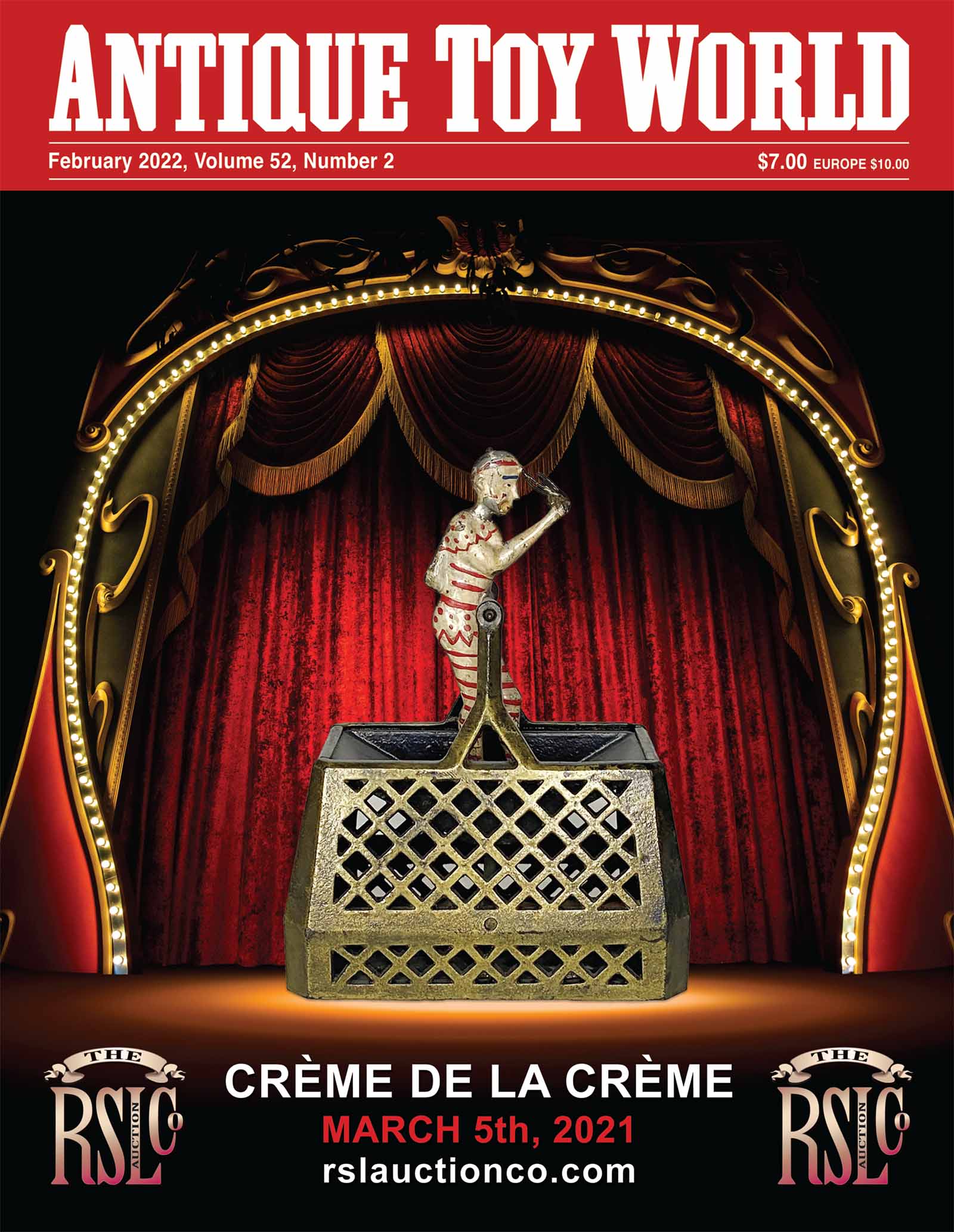 PICTURED IS A 4.8-inch broom introduced by Renwal in 1950 and offered as a doll house accessory item. It is the earlier of two versions that the company made. Both were numbered and named as their “121 BROOM”. The broom is marked “RENWAL U.S.A” on the red broomstick and is an example of an earlier […] 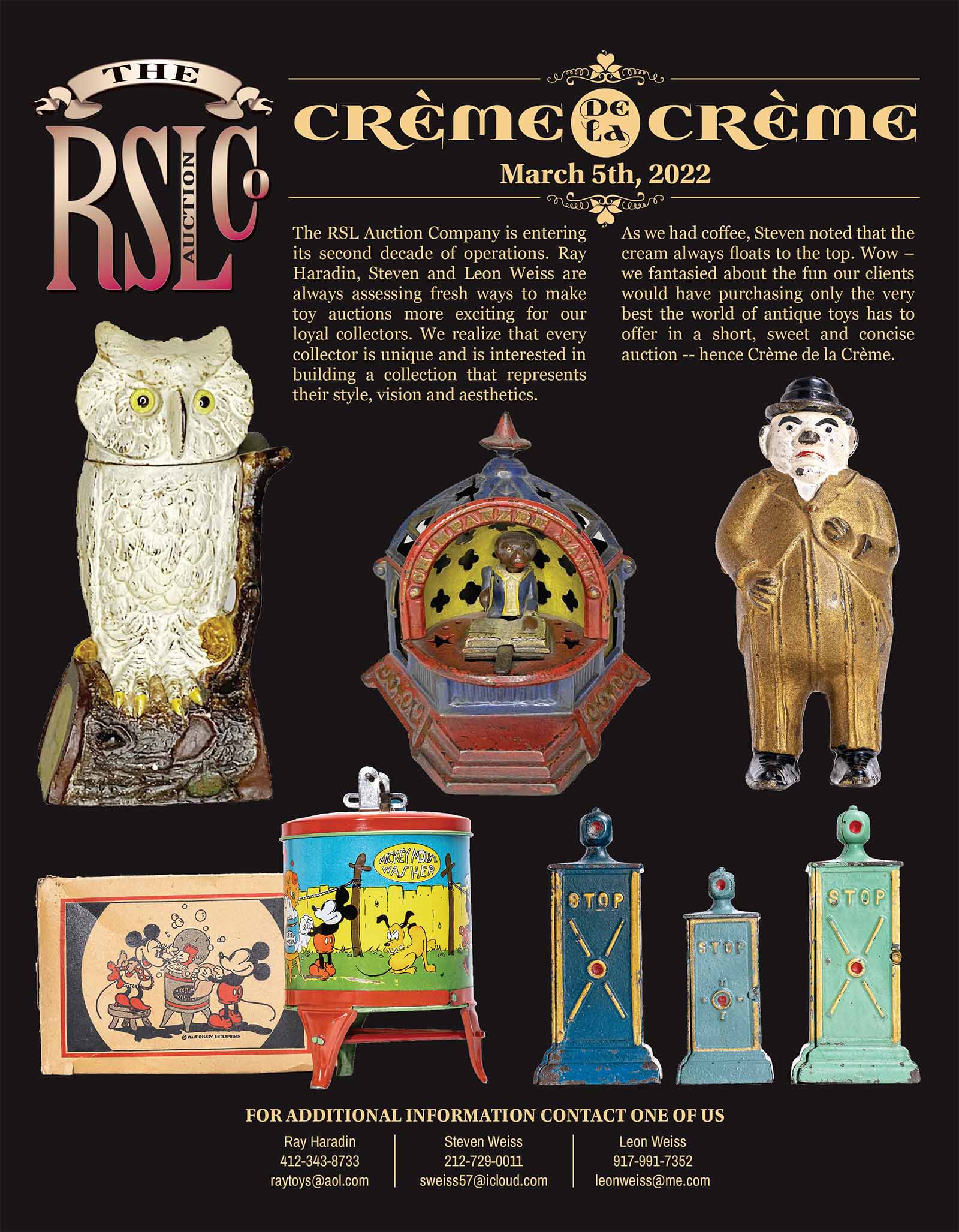 Nearly 130 coveted toy motorcycles are lined up for the sale, including rare prototypes WILLOUGHBY, Ohio – Antique and vintage toys played a major role in Milestone Auctions’ success in 2021. Their October 2nd toy event rocketed to $768,000, a house record for the suburban Cleveland, Ohio, company. Milestone is on track to keep that […]

By Steve Butler TOPPING MODELS is primarily known for their desktop aircraft models of which the company made many different examples. The company also made White 3000 van semis for use as dealership promotionals for the White Motor Company. These rigs are molded in plastic that seems to be impervious to warping. “White” is heat-stamped […]