[Vanguard] Nigerian man, Kunle Adeyanju who embarked on a "charity ride" from London, the UK, to Lagos, has revealed that Mauritania is not a country he wants to visit again for anything.

[Government of Mauritius] The Ambassador-Designate of the Republic of Mauritania to Mauritius, Mr Jarr Inalla, paid a courtesy call, today, on the Minister of Land Transport and Light Rail, Minister of Foreign Affairs, Regional Integration and International Trade, Mr. A. Ganoo, in Port Louis.

[CAF] Newly appointed coach of Mauritania Amir Abdou is delighted with his start after leading the Mourabitounes two friendly victories insisting there are great signs for future successes.

Dialogue With Jihadists - Mauritania Offers Lessons for the Sahel

[Tunis Afrique Presse] Tunis/Tunisia -- Minister of Employment and Vocational Training Nasreddine Nsibi and his Mauritanian counterpart, Taleb Ould Sid Ahmed, on Monday, signed a memorandum of understanding between Tunisia and Mauritania on sharing expertise and experience in the fields of employment and vocational training.

[CAF] Former France youth international El-Hadji Ba has switched allegiance to play for Mauritania and has been named in the squad for this month's friendlies.

[Tunis Afrique Presse] Tunis/Tunisia -- Four partnership and cooperation agreements were signed between the international branch of the Confederation of Citizen Enterprises of Tunisia, (CONECT) and the Investment Promotion Agency of Mauritania (APIM), the National Union of Mauritanian Employers, the Chamber of Commerce, Industry and Agriculture of Mauritania and the Free Zone Authority of Nouadhibou, on the fringes of the Tunisian-Mauritanian Economic Forum organised March 6-11 in Nouakchott and Nouadhibou.

[VOA] Bamako, Mali -- A Malian delegation is expected in Mauritania's capital Friday to discuss the alleged disappearance of several Mauritanians on Malian territory.

[CAF] The Mauritanian Football Federation (FFRIM) has organized several friendly matches for its teams during the March FIFA friendly window, with the national senior team not engaged in the play-off round of qualification for the 2022 FIFA World Cup.

[Tunis Afrique Presse] Tunis/Tunisia -- The Tunisian-Mauritanian Forum "For a partnership and efficient and profitable investments for both countries" started on Monday in Nouakchott, with the participation of 100 business institutions and operators.

[Tunis Afrique Presse] Tunis/Tunisia -- The Confederation of Tunisian Citizen Enterprises (Conect) is organizing, from March 6 to 19, in Nouakchott and Nouadhibou in Mauritania, Tunisian-Mauritanian multisectoral economic days under the theme "For a partnership and efficient and profitable investments", with the participation of 40 companies from various sectors.

[New Times] Rwanda and Mauritania have signed an Air Transport Agreement that will enable the national carrier RwandAir to establish flights to the latter in the future, according to Stephanie Nyombayire, the Presidential Press Secretary.

[RFI] Kenya and Mauritania have received nearly two million new doses of Covid-19 vaccines from the United States in the latest push against the Omicron variant sweeping the world. 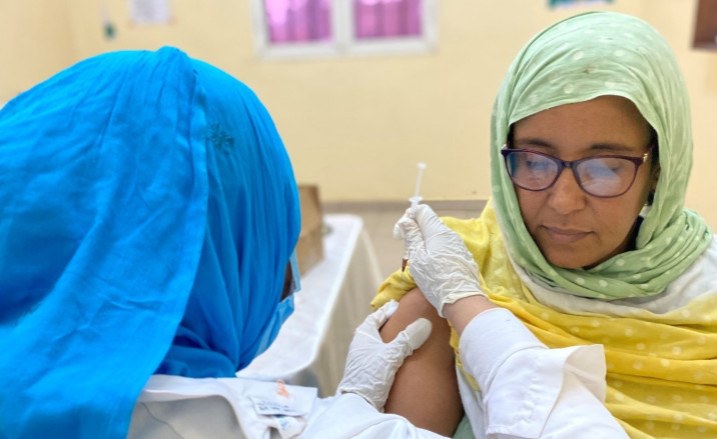 Fighting the Pandemic One Jab at a Time

[World Bank] This morning, in the suburbs of Nouakchott, the waiting room of the Teyarett vaccination center is buzzing with people. A steady stream of women and men from all walks of life are coming to get vaccinated. Doctors and nurses check their vitals, enter the data, administrate the doses, and issue the vaccination certificates.

Slavery in Mauritania and the Shame of a Continent

[Premium Times] In November 2017, the world watched in utter disbelief, some cringed-worthy footage aired by CNN where dozens of men in detention facilities were being auctioned off for as little as $400 each in Libya. If you think that was a fluke, the crew was also told of the existence of similar auctions taking place at nine other locations in the country. The victims? People that look like me that belong in the melanin-rich subset of Africans. The traffickers were our brothers, a shade or two lighter from the north.

[CAF] The Eagles of Mali beat Mauritania 2-0 in Douala to secure top spot in Group F of the TotalEnergies Africa Cup of Nations, Cameroon 2021.

[CAF] After disappointing identical 1-0 defeats to Mali and Gambia respectively, Tunisia and Mauritania go to TotalEnergies Africa Cup of Nations Group F Match Day 2 with no room for error.

[The Point] Scorpions of The Gambia yesterday, Wednesday won their maiden Africa Cup of Nations (Afcon) opening Group F match against Mauritania after Ablie Jallow's lone goal in the 10th minute of the game played at the Limbe Ominsport Stadium.

Historic Victory for the Gambia at AFCON

[CAF] A day of history. The Gambia' Scorpions achieve a historic feat by winning their first match for their first appearance in AFCON finals.

[CAF] Neighbors Mauritania and Gambia will start their Group F adventure of the TotalEnergies Africa Cup of Nations, Cameroon 2021 with an awaited encounter in Limbe.

[CAF] Neighbors Mauritania and Gambia will start their Group F adventure of the TotalEnergies Africa Cup of Nations, Cameroon 2021 with an awaited encounter in Limbe.

[CAF] Mauritania Coach Didier Gomes Da Rosa said his team is in good shape ahead of the TotalEnergies Africa Cup of Nations, Cameroon 2021.

President Saied and His Mauritanian Counterpart Speak Over Phone

[Tunis Afrique Presse] Tunis/Tunisia -- President of the Republic Kais Saied, on Tuesday, had a phone call with his Mauritanian counterpart Mohamed Ould Ghazouani, wishing him a quick recovery.

[Algerie Presse Service] The President of the Islamic Republic of Mauritania, Mohamed Ould Cheikh El-Ghazouani on Monday started a three-day state visit to Algeria, at the invitation of the President of the Republic, Abdelmadjid Tebboune.

[Algerie Presse Service] ALGIERS-The President of the Republic, Abdelmadjid Tebboune, said Tuesday that "significant strides" have been made in relations between Algeria and Mauritania, "which stepped up particularly after the opening of the border post."

[Algerie Presse Service] Algiers -- President of the Republic Abdelmadjid Tebboune held on Tuesday, at the headquarters of the Presidency of the Republic, a private meeting with his Mauritanian counterpart Mohamed Ould Cheikh El-Ghazouani who is on a three-day State visit to Algeria.