[VOA] Yaounde -- Cameroon and the Central African Republic have agreed to demarcate several hundred kilometers of their shared border. The countries have have competing claims to villages and towns along the porous, undefined border. The two sides also vowed joint efforts to stop violence along the border, where Central African rebels have been hiding and launching raids for supplies.

[VOA] Yaounde -- In Cameroon, hundreds of people have protested attacks on schools, churches, and clinics in the country's troubled west after a hospital in the city of Mamfe was torched. Cameroon's military and separatists traded blame for last week's attack.

[New Times] Moise Mugisha, the newly crowned Tour du Cameroun champion and his teammates received a heroes' welcome in Kigali on Tuesday after Team Rwanda dominated the race that concluded on Sunday, June 12.

[VOA] Njitapon, Cameroon -- Cameroon's military on Thursday said it deployed about a hundred troops to the French-speaking village of Njitapon, after 35 anglophone separatists attacked the outpost.

[VOA] Yaounde -- Cameroon's military says it has arrested four of its troops for the killing of nine civilians, including four women and a baby. A military spokesman says the troops fired on villagers after not getting any help in their search for a missing colleague in the rebel-prone area.

[Premium Times] "Our personnel have been very busy attending to the influx of these refugees, many of whom are severely wounded."

[VOA] Yaounde -- Several hundred children marched through the streets of Cameroon's capital, Yaoundé, on June 6 holding placards that called for an end to the use of child soldiers in the country's separatist conflict, as well as other abuses to children stemming from the fighting.

[Daily News] President Samia Suluhu Hassan sent a congratulatory message to the U-17 National women's soccer team, Serengeti Girls for their victory over Cameroon on Sunday and subsequently qualifying for the 2022 World Cup.

Locusts in Cameroon - From Pest to Seasonal Asset

[VOA] Yaounde, Cameroon -- A commission of senior security and state officials from the troubled Central African Republic and Cameroon has agreed to jointly fight armed C.A.R. rebels they say are fleeing intensive fighting and infiltrating refugee camps in Cameroon. After concluding a meeting in the border town of Ngaoundere, the delegations said they will jointly deploy their militaries to battle the proliferation of weapons, abductions for ransom, attacks for supplies and the illegal exploitation of minerals by rebels along their

[VOA] Gado Badzere, Cameroon -- Central African Republic refugees in Cameroon have started returning home after fleeing political and sectarian violence there since 2014. There are around 300,000 C.A.R. refugees in Cameroon, most of them women and children. Hundreds have agreed to return home after Bangui promised peace has returned to their towns and villages.

[VOA] Yaounde -- Cameroon's military says it has freed a senator who was held captive by separatists for a month along with other hostages.

[Thomson Reuters Foundation] With its hydroelectric plants hobbled by drought, the country is courting investors to grow a more stable solar energy supply

[VOA] Yaoundé -- Officials from Gabon and Cameroon have agreed to retrace their nearly 300-kilometer border and to stop frequent clashes between border communities. At a meeting in Cameroon's capital Thursday night, the two sides also agreed to jointly deploy their militaries to stop arms trafficking across the border.

[New Times] The national cycling team head coach, Felix Sempoma, has announced a six-man roster that he will use ahead of the Tour du Cameroun 2022m slated for June 4-12.

[VOA] Police in northern Cameroon said they have freed 70 children from an illegal disciplinary camp, where the children say they were left by their parents to be chained and beaten. According to authorities, camp workers were detained and the injured and traumatized children are being treated.

[VOA] Cameroonian authorities say Monday several hundred civilians took to the streets of Lolabe, a small coastal village on the banks of the Atlantic Ocean. The civilians said they were protesting the recent deal signed by the government for iron ore to be exported from their village and Lobe, the district where Lolabe is located.

[CAF] The Serengeti Girls of Tanzania edged closer to a maiden qualification after they defeated the baby Lionesses of Cameroon 4-1 in the first leg, final round qualifiers for the India 2022 FIFA U17 Women's World Cup in Yaounde on Sunday.

[CAF] Football Legends from across the Continent, were in Cameroon over the weekend, to celebrate the 70th birthday of former Cameroon international Albert Roger Milla.

[VOA] Yaounde -- Cameron's National Day on May 20 has been marked by running battles between government troops and separatists who imposed a lockdown, crippling business in English-speaking western regions. The military says at least 28 separatists who vowed to disrupt celebrations in English-speaking regions of the majority francophone nation were killed in violent battles. President Paul Biya is attending commemorations.

[Daily News] NATIONAL Women U-17 team "Serengeti Girls" will jet off to Cameroon for a World Cup qualifier match today.

The #AfricaClimateCrisis Tinderbox in Northern Cameroon

[African Arguments] Amid growing resource scarcities, dozens have died and tens of thousands have been displaced by fighting triggered by a cow drowning.

[VOA] Yaounde -- Villagers along Cameroon's northern border with Chad and Nigeria have been holding daily protests in front of government offices demanding that the military intervene and deploy troops in areas where attacks by Boko Haram have increased. Protesters say in the past three weeks alone, at least 35 villagers were killed after an alleged attack by the Islamist militant group

[VOA] Yaoundé -- World Red Cross Day, May 8, has been observed in Cameroon with hundreds of Red Cross workers in towns and villages across the central African state asking for greater recognition and protection by their communities. The humanitarian workers say although they have not reported deaths, Red Cross workers are often victims of battery, Boko Haram terrorism, and separatist violence.

[New Frame] The achievements of the national team since 2015 have built support for the Indomitable Lionesses, leading to sponsors, match broadcasts and a commitment to uplift the game in the country.

[UN News] A veteran Cameroonian activist working to preserve her country's forests, and improve the lives of people who depend on them, is the latest winner of a UN-backed international environmental prize.

[CAF] Former Cameroon international Aurélien Bayard Chedjou Fongang, has announced the end of his career as a professional footballer.

[VOA] Yaounde -- The U.N.'s refugee chief, Filippo Grandi, on a visit to Cameroon this week, vowed to give more support to displaced Central Africans and Cameroonians fleeing intercommunal violence. Grandi spoke at a ministerial conference in Yaoundé on helping refugees from the Central African Republic and during a visit to northern Cameroon.

Why Handcrafting Cameroonian Drums Is a Dying Art

[RFI] Although locally produced drums are an integral part of music across various tribes in Cameroon, this traditionally handmade instrument is falling out of use due to the increased use of modern instruments. Drums are typically played at traditional cultural events, but some modern recording artists have shown an appreciation for their ancestors, too.

[RFI] The ongoing crisis in the north-west of Cameroon in the anglophone region, coupled with the effects of the Covid-19 pandemic and the Russian invasion of Ukraine, has pushed the price of stable foods beyond the reach of many.

[VOA] Yaounde, Cameroon -- Cameroon's energy ministry has said Western sanctions on Russia have driven up the cost of fuel imports and led to a fuel shortage. The lack of diesel fuels this week left hundreds of trucks taking goods to the neighboring Central African Republic and Chad stranded at the borders.

[New Times] Rwanda Energy Group basketball club will take on Cameroon's Forces Armées et Police (FAP) Basketball club in the round of eight playoffs of the Basketball Africa League (BAL) that are scheduled to take place at the Kigali Arena in Kigali from May 21-28.

Kenya Drawn With Cameroon in Afcon 2023 Qualifiers Despite FIFA Suspension

[Capital FM] Nairobi -- Kenya's Harambee Stars have been drawn in Group C of the 2023 Africa Cup of Nations qualifiers, despite currently under suspension by world football governing body FIFA. 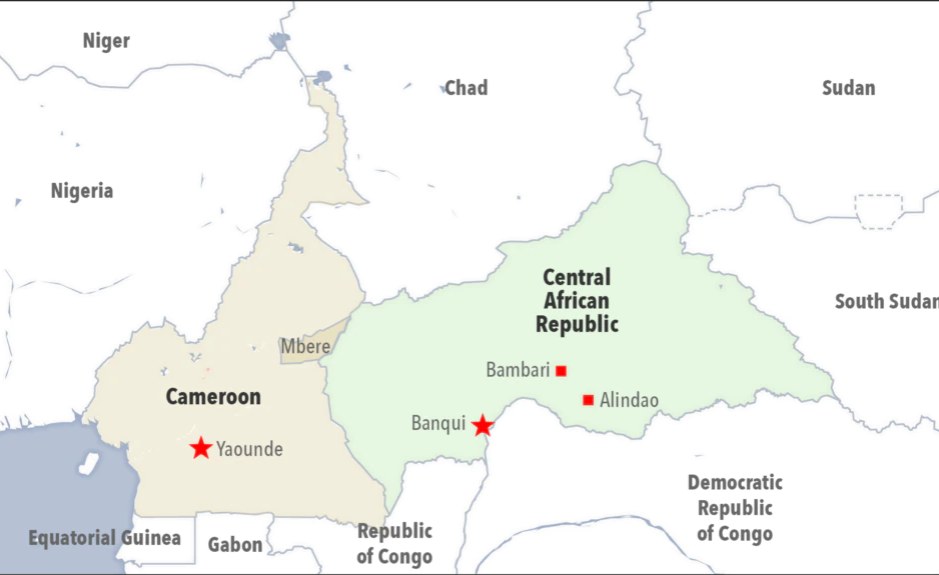 [VOA] Yaounde -- Cameroon's military has deployed hundreds of troops to its eastern border with the Central African Republic after CAR rebels this month abducted at least 35 people. The military says the rebels are targeting merchants, farmers, and ranchers and stealing money and cattle.

'It's Been a Nightmare, but I Feel Safe Now' - U.S. Gives Cameroonians Reprieve

[RFI] Cameroonians living in the US who lived in fear of imminent deportation have been given an 18-month reprieve by the US government, according to the US Department of Homeland Security (DHS).