[Dabanga] Khartoum / Juba / Kauda -- Two leading members of the Communist Party of Sudan (CPoS) were detained in Khartoum yesterday after their return from Juba, the capital of South Sudan, earlier that day. They had visited South Kordofan to talk to Abdelaziz El Hilu, leader of the Sudan People's Liberation Movement-North (SPLM-N), and Abdelwahid El Nur, leader of the Sudan Liberation Movement in Darfur.

Khartoum and Juba Hold Talks On Cooperation in Petroleum Field

[SNA] Khartoum -- Joint talks between Khartoum and Juba began today in Khartoum to develop joint cooperation in the field of petroleum, discuss technical and financial arrangements, increase oil production and the challenges that faced implementation of previous agreements between the two countries in this regard.

[The Point] The Events Management Committee (EMC) of The Gambia Football Federation (GFF) has disclosed ticket prices for the Scorpions 2023 Africa Cup of Nations qualifiers opener at home to South Sudan on 4th June 2022 at the Stade Late Dior in Thies, Senegal.

[The Point] Brikama United creative midfielder Bun Sanneh has been invited to The Gambia senior national team; the Scorpions ahead of their 2023 Africa Cup of Nations qualifiers opener at home to South Sudan on 4th June 2022 at Stade Late Dior in Thies, Senegal.

[Addis Standard] Addis Abeba -- Ethiopian Electric Power (EEP), the state-owned electric producer in Ethiopia, signed a memorandum of understanding to supply electricity to South Sudan, according to the state utility.

Kalonzo in South Sudan for Peace Talks With Kiir, Machar for Peace

[The Conversation Africa] A notable consequence of Russia's invasion of Ukraine has been the near-complete breakdown of what was already a deeply fraught relationship among the permanent members of the UN Security Council.

[The Conversation Africa] Salva Kiir and Riek Machar loom large over South Sudan's recent history. And they will keep holding the future of the young nation in their hands to a large extent.

[CISA] Lukenya -- Religious leaders from the South Sudan Council of Churches (SSCC) in a statement dated April 29, pledged to, "continue... efforts to bring about a lasting 'just peace'... through spiritual renewal, advocacy, dialogue, reconciliation and trauma healing while encouraging all non-violent means of bringing about positive change in... society."

Seminar to Nationals in Juba and Its Environs

[Shabait] Asmara, 08 May 2022 - The Presidential Advisor and Head of Political Affairs of the PFDJ, Mr. Yemane Gebreab conducted a seminar to nationals in Juba and its environs, South Sudan focusing on the objective situation in the homeland and regional as well as global developments.

What Cattle Conflicts Say About Identity in South Sudan

[The Conversation Africa] In March 2022, violent clashes between farming communities and cattle herders broke out in Eastern Equatoria State, South Sudan. It was the latest incident in months of cattle-related violence in the area, which is in the country's southern region.

[VOA] Juba -- Journalists in both Sudan and South Sudan say threats, intimidation and arbitrary arrests are part of everyday life, limiting their ability to inform the public.

[The Conversation Africa] Implementation of the 2018 peace agreement in South Sudan lags significantly behind its mandated schedule. One of the reasons for this slow progress is establishing a unified military command structure. This was to be done within the first eight months of signing the pact.

[UNFPA] Bentiu -- "I used to collect firewood, make charcoal, and sell fresh milk to help meet our family's needs," Nyachar Gatneay Rial, 38, told UNFPA. "Now I have to sell tea in the local market to earn some money."

[Dabanga] Khartoum / Kereinik -- A spokesperson from the European Union (EU) issued a statement concerning the West Darfur tribal conflict today. The EU statement highlighted their vehemence in insisting that the Juba Peace Agreement be respected by all its signatories.

[MSF] After fleeing their homes more than two months ago, tens of thousands of people are still left without basic necessities in Twic County, South Sudan. Despite repeated calls by Médecins Sans Frontières (MSF), the humanitarian community in South Sudan has failed to scale up assistance to people who have largely been left without food, shelter and sanitation.

A Pop-Up Market Empowers Refugees From Ethiopia in South Sudan

[WFP] Markets come in all shapes and sizes, from traditional set-ups to online farmers markets. In South Sudan, the World Food Programme (WFP) has rolled out a 'retail in a box' pop-up initiative in Gorom refugee camp that is spurring on local businesses while helping refugees buy their foods of choice.

[UN News] Additional peacekeepers have been deployed to Leer county, South Sudan, following a surge of violence, including rapes, gang rapes, beheadings, burning civilians alive, and attacks on humanitarians, the UN Mission in the country, UNMISS, reported on Monday.

[VOA] Juba, South Sudan -- The editor-in-chief of South Sudan's oldest English-language newspaper, the Juba Monitor, has been arrested for allegedly defying a court order to stop publication over alleged malpractice.

Gambia to Begin AFCON Qualifiers Against South Sudan in June

[The Point] The Gambia senior national team is set to begin its 2023 Africa Cup of Nations qualifier campaign at home to South Sudan in June 2022. 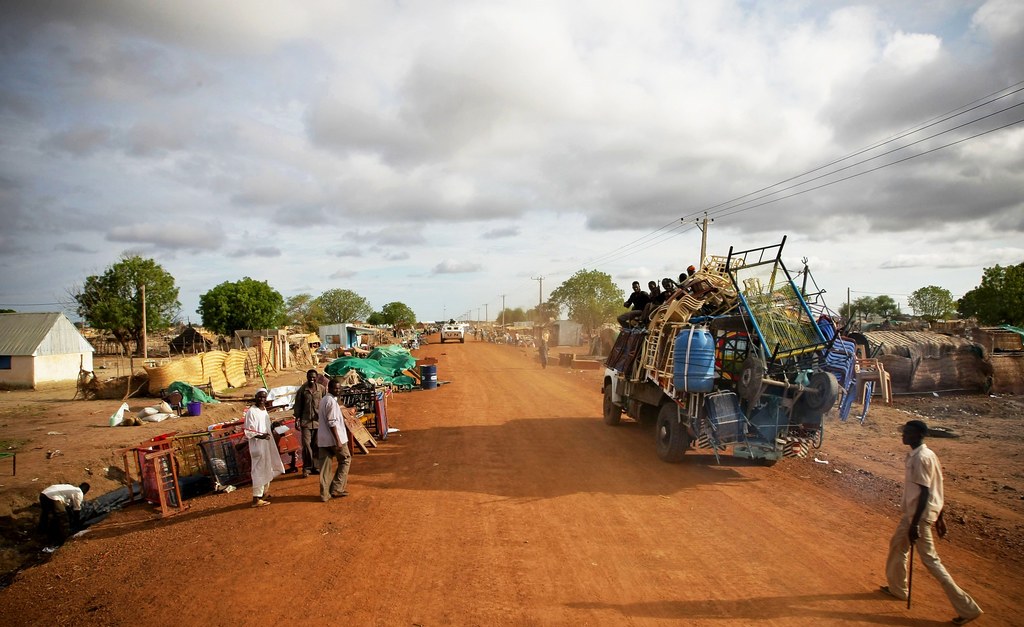 [UN News] Although the overall security situation in the disputed Abyei region between Sudan and South Sudan has remained calm, the "trust deficit" between the two main communities continues to be a great concern, UN Peacekeeping chief Jean-Pierre Lacroix told the Security Council on Thursday.

[MSF] The latest violence in Leer County, South Sudan, has resulted in the deaths of dozens of civilians, including a Médecins Sans Frontières (MSF) staff member. This is the second MSF staff member who has been killed in Leer due to extreme violence since December 2021.

Eastern African Countries Agree to Work Together On Security Issue

[ENA] Addis Ababa -- The East African military intelligence institutions have agreed to work together on the security issue in the region.

[VOA] Geneva -- The United Nations warns a record 7.74 million people, or two-thirds of South Sudan's population, are likely to face hunger during this year's lean season between May and July. This is the dangerous period between planting and harvesting when food stocks are at their lowest.

[UN News] The threat of famine is very real in Somalia and South Sudan and urgent action is needed now to avoid a catastrophe, UN humanitarians warned on Tuesday. 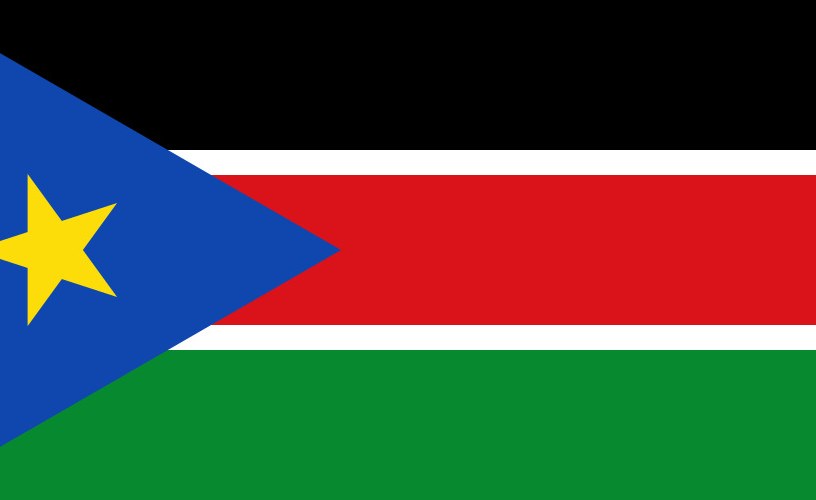 Kiir and Machar Kiss and Make Up Yet Again

[ISS] But looming elections and the challenge of unifying the army could once more derail South Sudan's peace deal. 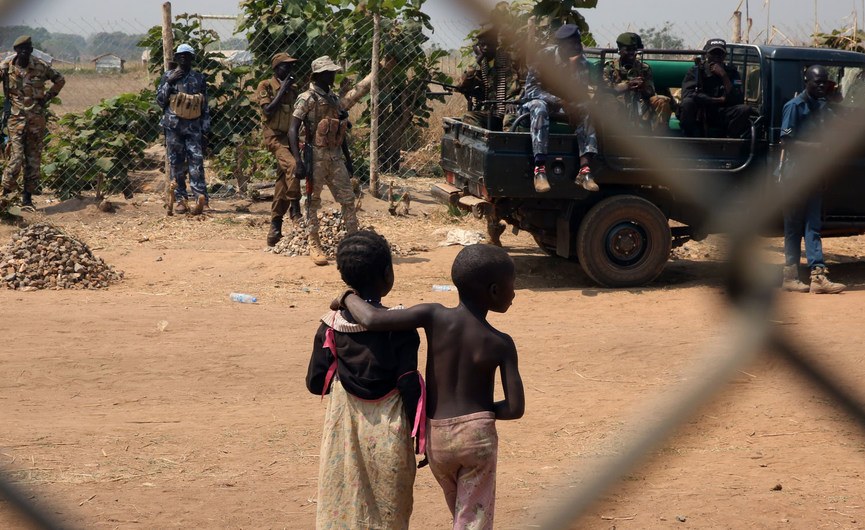 [Ghanaian Times] South Sudan peace monitors on Tuesday welcomed the launch of public consultations to pave way for the start of truth, reconciliation and healing process under the 2018 revitalised peace deal. 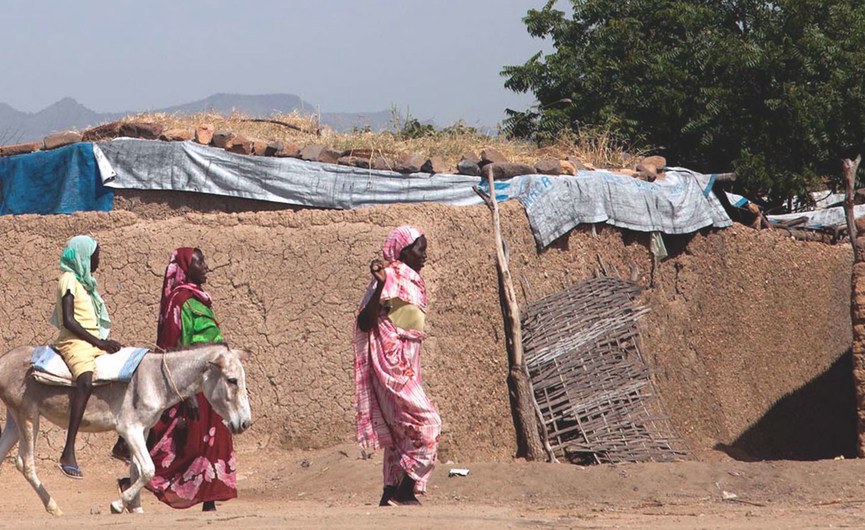 Congress of Ypfdj Organization in Juba

[RFI] South Sudan President Salva Kiir and Vice President Riek Machar have agreed to return to re-start talks on integrating their rival forces into the army after escalating tensions threatened to derail the 2018 peace agreement. 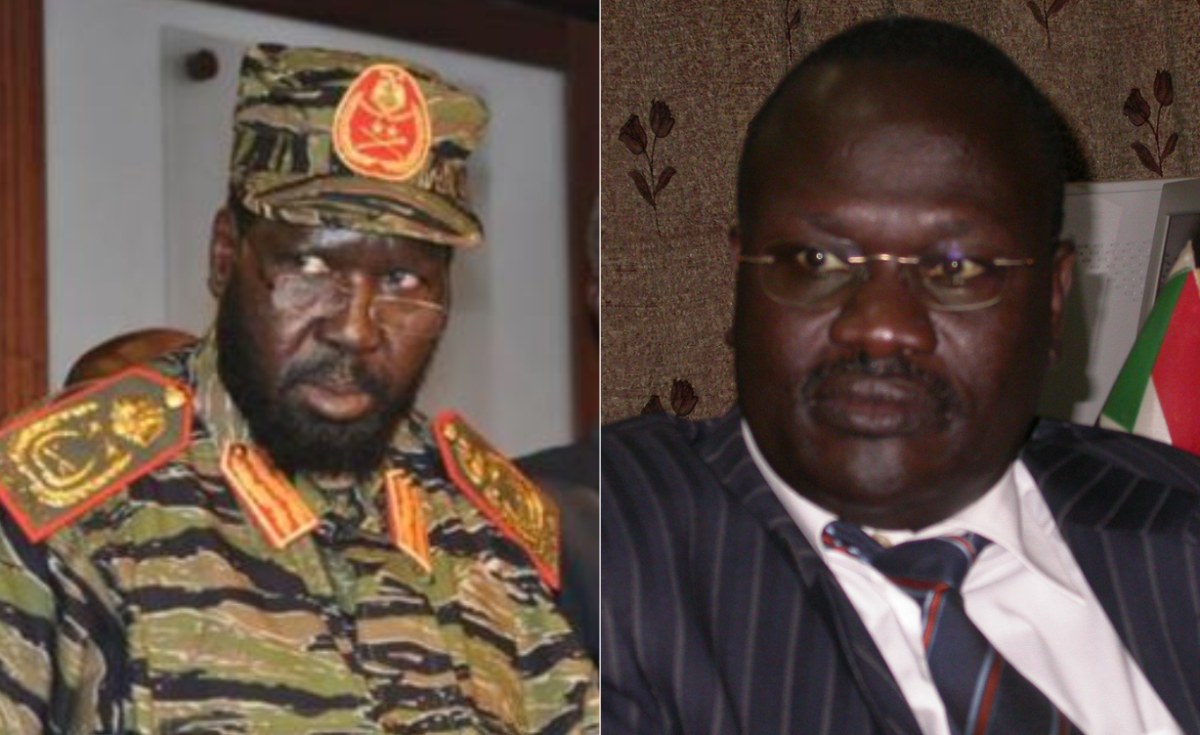 Leaders Agree on Key Provision of the 2018 Peace Deal

[allAfrica] Cape Town -- Four years after the signing of a peace agreement to end the conflict in South Sudan, numerous blockages and weeks of tension raised fears of a resumption of hostilities. Now the peace process seems to have taken a step forward, thanks to the mediation of neighbouring Sudan. President Salva Kiir and his former rival, Vice-President Riek Machar, signed a key military agreement on April 3, 2022, as part of the 2018 peace agreement, over which negotiations were stalled for weeks.

[SNA] Juba -- Vice-President of the Transitional Sovereignty Council (TSC) Gen. Mohamed Hamdan Daglo received at his residence in the South Sudanese capital, Juba, Vice-President of the Republic of South Sudan Hussein Abdelbagi Akol, in the presence of acting Minister of Defense Lt. Gen. Yassin Ibrahim and Ambassador of the Republic of the Sudan to Juba Jamal Malik besides members of the technical committee. 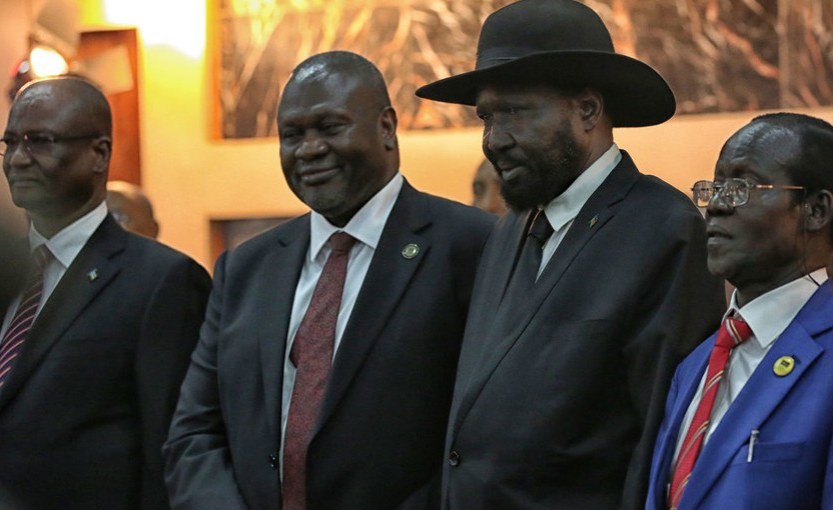 Notice on the Continuation of the National Emergency with Respect

[State Department] On April 3, 2014, by Executive Order 13664, the President declared a national emergency pursuant to the International Emergency Economic Powers Act (50 U.S.C. 1701-1706) to deal with the unusual and extraordinary threat to the national security and foreign policy of the United States constituted by the situation in and in relation to South Sudan, which has been marked by activities that threaten the peace, security, or stability of South Sudan and the surrounding region, including widespread violence and a

[VOA] Geneva -- Aid agencies warn hundreds of thousands of South Sudanese are likely to suffer devastating consequences during this year's wet season without emergency international support to head off the worst impacts.

U.S. Concern About the Deteriorating Situation in the Country

[State Department] The United States notes with concern the growing tensions in South Sudan, including recent clashes between the South Sudan People's Defense Force's (SSPDF) and the Sudan People's Liberation Army/Movement-In Opposition (SPLA/M-IO) in Upper Nile state. We call for both sides to observe fully their obligations under the existing peace agreement and note that inflammatory rhetoric is counterproductive and should cease immediately. The SPLM-IO's withdrawal from all peace agreement monitoring and verification me

[allAfrica] Cape Town -- Coronavirus lockdowns have contributed to "soaring rates" of sexual and gender-based violence across Africa, says a new report. And "almost all actors" in the continent's armed conflicts use sexual violence as a tactic of war.

The Mental Health Crisis Caused by Covid-19 and Conflict

[allAfrica] Johannesburg -- As we move into the third year of the Covid-19 pandemic, we've also seen more openness about another global crisis. The rise in stress, anxiety, depression and other mental health illnesses has risen dramatically during the lockdowns and social isolation of the pandemic. But in places where conflict, displacement and deaths have become widespread, the challenges of the past few years have added another layer onto the mental strain that people already face.

[IMF] End-of-Mission press releases include statements of IMF staff teams that convey preliminary findings after a visit to a country. The views expressed in this statement are those of the IMF staff and do not necessarily represent the views of the IMF's Executive Board. This mission will not result in a Board discussion. 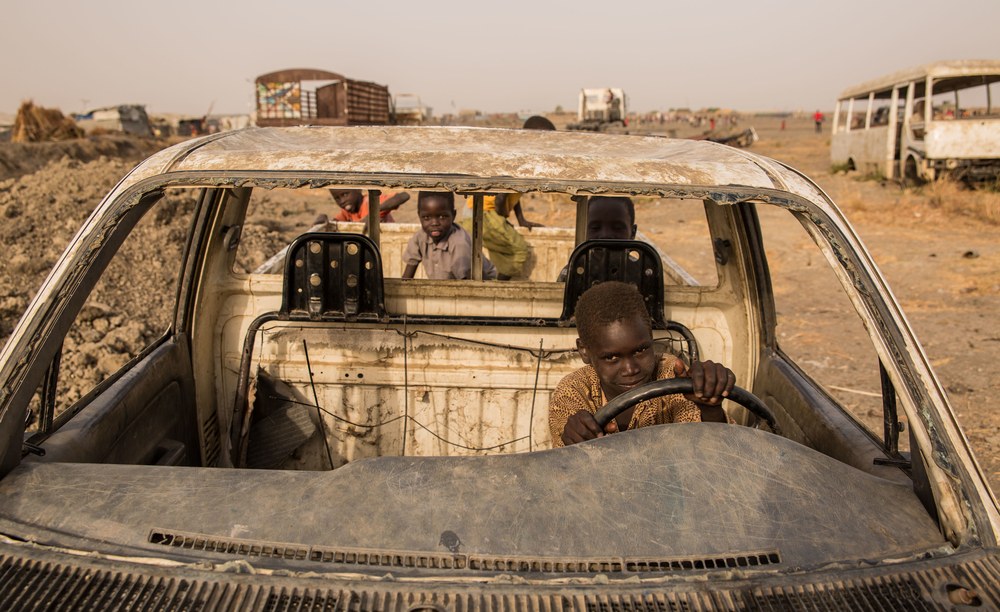 [VOA] Juba -- The United States, the United Kingdom and Norway -- known as the Troika -- have condemned the South Sudan People's Defense Force (SSPDF) for attacking SPLA-In Opposition military bases in parts of the Upper Nile region.

Main Opposition Opts Out of Security Talks Due to Attacks

Sexual Violence As A Weapon of War - the Horrifying Details

[allAfrica] The 48-page paper presented by the UN Human Rights Council's commission on South Sudan in Geneva on Monday provided horrifying details of the use of sexual violence against women and girls as a weapon of war in that nation.

[UN News] Widespread sexual violence against women and girls in conflict is being fueled by systemic impunity, the United Nations Commission on Human Rights in South Sudan said on Monday.

[Daily Maverick] On Human Rights Day, let's spare a thought for Zimbabweans who face new threats to the civic space and freedom of expression that is so vital to democracy.

[VOA] Geneva -- The U.N. Refugee Agency, UNHCR, and 102 humanitarian and developmental agencies are asking for $1.2 billion to help 2.3 million South Sudanese refugees and communities sheltering them in five countries.

[allAfrica] Geneva -- South Sudan, the world's newest country, faces a critical moment in its transition from civil war , with a faltering peace agreement and predatory government officials who pillage aid meant to feed the beleaguered population, the chair of a UN commission said Friday.